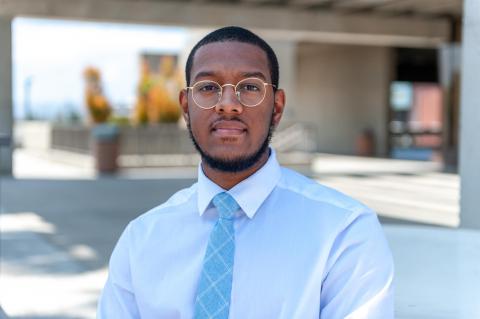 No one succeeds alone.

Of the many lessons El Camino College graduate Aaron Batiste has learned throughout his journey in higher education, that one may be the most important.

The Inglewood native had a rough start in college, marked by poor grades and low motivation. But with help from role models and support from El Camino College’s Project Success, he became a straight-A student after transferring to Harris-Stowe State University in Missouri. In addition, he finished a term on a White House advisory committee.

“Definitely my most notable achievement while at Harris-Stowe was to serve as an ‘HBCU All Star’ with the White House Initiative on Historically Black Colleges and Universities,” Batiste said. “After I was selected, we were all flown to Washington, D.C. for a conference, workshops, and a chance to meet many people at the White House. It was an honor and an amazing eye-opening experience to be able to sit at the table where I haven’t been before.”

Batiste recently graduated with a bachelor’s degree in educational studies and now will pursue a master’s degree at the University of Mississippi in higher education/student personnel in preparation for a career in educational administration. He served in a variety of leadership and community service positions at Harris-Stowe, competed on a live TV quiz show (besting rival Spellman College) and was dubbed the royal “King of the Campus,” an honor bestowed annually for the campus king and queen.

He achieved success in many areas, but he is quick to point out that he didn’t start that way.

After graduating from Westchester High School, his parents suggested he enroll in El Camino College. That first semester was tough; Batiste finished with a 1.8 GPA. He said didn’t care much for high school and was clearly not focused on making the transition into college. Soon, he joined ECC’s Project Success, a program designed to increase students’ retention rates and improve their academic performance. It proved to be a life-changing decision.

“It was El Camino College and Project Success events that really helped me get out there and see the bigger picture,” Batiste said. “One thing I remember as if it was yesterday. I was at a Project Success event in a room full of black males – all with Ph.D.s. Amazing. That alone showed me that if they can do it, I can do it. That changed everything for me. I think if it wasn’t for Project Success, I probably would have given up after that first year. The life lessons I learned through Project Success – they stuck with me.”

Initially struggling at El Camino College, Batiste wasn’t sure how to move forward. He saw his classmates advance and wondered why he could not do that as well. That’s when he started going to the library, putting in long hours of studying and staying until closing time every day. He hit his stride and managed to earn all B’s, graduating with an associate degree in history in 2015.

“Through programs such as Project Success, El Camino College offers the support students need to complete their academic and career goals,” said El Camino College President Dena P. Maloney. “The success of Mr. Batiste is an example of what can be accomplished through hard work. We are proud of his achievements and wish him the best in his graduate studies.”

Batiste was accepted into several prestigious universities. He was leaning toward Howard University until he met the president of Harris-Stowe State University, Dwaun J. Warmack, at an HBCU conference in Oakland.

“I was so impressed when I met Dr. Warmack; he is a really great people person,” Batiste said. “I told him, ‘Here are my transcripts; I will show you that I’m a 4.0 student at heart, if not on paper.’ He accepted me on the spot. And so, as I arrived at the university, I was able to use all the tools, all the failures, and all the experiences from El Camino College and turn them into positives at Harris-Stowe. And, that first semester, I received my first 4.0 GPA. After that, I was on my way.”

While at Harris-Stowe State University, Batiste worked as a resident adviser, which covered room and board and helped keep down college expenses. He also caught a glimpse into a future career.

“As a resident adviser, I went into the program as a way to be debt free at graduation, but I came out at the end of the year with the experience of learning that I love working with students,” he said. “That made me pursue a career in higher education. Anybody who asks me about my long-term goal, I say that I want to be a president of an HBCU.”

Batiste is also thankful for the support of his parents, and he hopes his educational journey will be an inspiration for his younger sister, a high school student who is also bringing home A’s. Whenever he is in town to visit his family, he makes sure to stop in and visit the Project Success office.

Brian Mims, an academic counselor with Project Success, said that Batiste was a positive role model for other students in the program and at El Camino College.

“Aaron Batiste does not allow his challenges and/or setbacks in life stop his progress toward accomplishing his goals,” he added. “He knows how to use all his resources, skills and knowledge to overcome the obstacles in his life.”

Batiste said he made a lot of mistakes at El Camino College and learned from them. But he always had backup.

“If I didn’t have the support system at Project Success, I would not be where I am today,” he said. “Even at my lowest of lows, they were there for me. They still are. I have learned that I can do anything with a diverse skill set. I tell anyone and everyone – El Camino College prepares you for everything. When you leave that campus, you are more than equipped to handle any course, anywhere. Period. You will have no worries academically. You are ready for anything.”

The fall semester at El Camino College begins Aug. 25. Registration is ongoing; students are encouraged to apply and register online as soon as possible at www.elcamino.edu. Fees are only $46 per unit.

El Camino College alumnus Aaron Batiste found success through role models and support from Project Success. He recently finished a term as an HBCU All Star with the White House Initiative on Historically Black Colleges and Universities. A graduate of Harris-Stowe State University in Missouri, he is now pursuing a master’s degree at the University of Mississippi.

Umoja actively serves and promotes student success for all students through a curriculum and pedagogy responsive to the legacy of the African and African American Diasporas.